The emergence and development of restaurants in Dublin

The Emergence and Development of Restaurants in Dublin

Since the beginning of time, food has brought people together in unity, whether for a celebratory feast, a family gathering, or a gastronomic social event. Food has a way of bringing joy and pleasure to our lives, but it wasn’t until the 18th century that the emergence of a food industry began, where people would gather under the same roof to dine in a restaurant. In the beginning, it was a luxury for the wealthy, but as time went on the restaurant industry throughout the world developed, and invited people from all walks of life to enjoy cuisines from all around the world. Plutarch, a Greek historian, once said “We do not sit at the table to eat… but to eat together”. 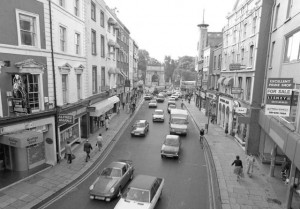 The first restaurant to ever grace our world was opened in Paris by Monsieur Boulanger in 1765. Monsieur Boulanger served a singledish – sheep’s feet simmered in a white sauce. The restaurant was unique from other food businesses such as Cafes or Inns, as it solely focused on food. Taverns served alcohol and cafes served tea and coffee but at Monsieur Boulanger’s restaurant people enjoyed the novelty of eating out for the first time. The success of this restaurant led to the significant increase of more new restaurants across France. 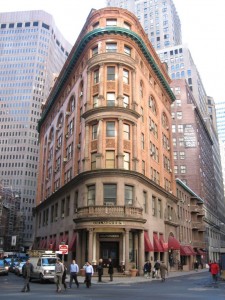 The United States followed behind France, with the actual term “restaurant” not entering into the common phrasing until the 19th century. The first restaurant in the United States was Delmonico’s, which was opened in 1824 by Swiss brothers Giovanni and Pietro Delmonico. Taking French inspiration, the restaurant was the first luxury restaurant in New York, and for almost 100 years defined “haute cuisine” in America. Dishes invented at Delmonico’s include Baked Alaska, Delmonico Potatoes, Delmonico Steak, Eggs Benedict and Lobster Newburg. Delmonico’s introduced to America the relatively-new French concept of a menu, where you could order different foods, for different prices and come in at any time of the day that suited you!

There are many references to food and drink in Irish mythology and early Irish literature  referencing banquets and social gatherings, but before 1800, Ireland was densely populated and languished behind other countries in terms of architecture, art and indeed food, therefore it developed slower than Britain, mainland Europe and America. During this time in Ireland the meat produced was mostly for the upper class until the late 19th century, and chickens were not raised on a large scale until the emergence of town grocers in the 1880s. Dublins Temple Bar area had probably not had the surge of restaurants and bars that we see today and also near the Stephens Green and Grafton street areas. 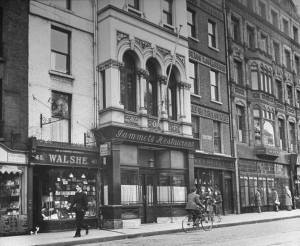 As Europe and America were becoming vastly populated with restaurants, Ireland followed suit during the early 20th century. Jammet’s Restaurant was established in 1901 by French brothers Michel and Francoise Jammet. The restaurant was located on Dublin’s Nassau Street, close to Grafton Street and Stephens Green and it served the finest French food and wine, while offering charm and sophistication. However, the restaurant closed in 1967 due to increased competition and a poor location. 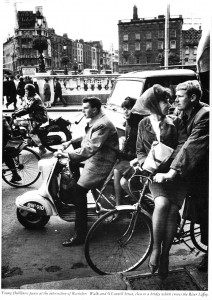 During the First half of the 20th century the restaurant business in Dublin began to bloom, especially close to Temple Bar and Trinity College. Many of Dublin’s most popular restaurants were part of hotels and the most popular of all was The Russell Hotel Restaurant. Headed by French chef Pierre Rolland, the restaurant was an educational foundation for many up and coming Irish chefs. The Michelin Guide to Great Britain and Ireland was first published in 1974, and awarded one star to the Russell Hotel. Subsequently, the hotel and restaurant also closed in 1974. During the 1970s and 1980s, Haute cuisine moved from the restaurants of Dublin to the country house hotels throughout Ireland. Restaurants near temple bar and close to stephens green were becoming more popular as Dublin city centre was booming. 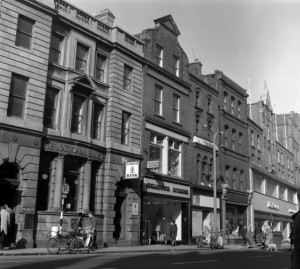 Hard times hit Ireland during the 1980’s and a recession saw a decrease in dining out. However, itwas still a popular pastime for those who could afford the luxury and many restaurants live to tell the tale, such as Trocadero, a restaurant close to Stephens Green in Dublin, which has been a part of the Dublin Restaurant scene for over 57 years. Situated amid some of Dublin’s most loved theatres, Trocadero celebrates the arts, with rich decor and film and stage photography. The restaurant offers a warm, thespian setting with a classic and varied menu.

Following The Russell Hotel, the next Michelin star was not awarded in Dublin until 1989, to another Frenchman and restaurateur, Patrick Guilbaud. By 2001 there were two Dublin restaurants close to Stephens Green awarded two Michelin stars each, Restaurant Patrick Guilbaud, and Thornton’s Restaurant, owned by Irish chef Kevin Thornton. Although the second star was not sustained by Kevin Thornton, both of these restaurants made it through the stormy times of Ireland’s latest economic crash while many restaurants were forced to close their doors.

Although Ireland was gradually making its gastronomic mark within the world of fine dining, the later part of the 20th century also brought an emergence of fast food and American ‘diner’ themed restaurants. The most famous of these restaurants being Captain America’s which first opened its doors on Grafton Street in 1971 and remains open to this day.

Over the past few years Dublin has also seen a major influx of restaurants which are inspired by cuisines from all corners of the world – Asian, Indian, Chinese, Thai, and Japanese restaurants are all extremely popular choices for people when it comes to dining out, especially near Temple Bar. Chains such as Diep, Jaipur, Yo Sushi, Yamamori and Wagamama’s are favourites amongst Dublin’s youth especially, highlighting Dublin’s cultural development and change when it comes to our taste buds! 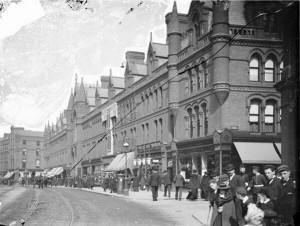 George’s Street, Dublin, has long been famous for its atmospheric vibe, Georgian buildings and of course, great restaurants. The street developed throughout the 17th and 18th century, a great classical era of urban planning and development in Dublin. Nowadays, George’s Street and the surrounding area has become a culinary hub for fashionable foodies of Dublin. On the flipside of the Celtic Tiger, Dublin diners now, more than ever, have an abundance of choice when it comes to delicious food, at affordable prices, in a stylish atmosphere. Therefore, crowds are shifting towards a more casual and rustic dining experience- without comprising the food, of course! 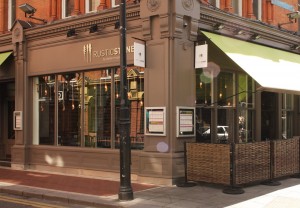 Certainly involved in this shift is Chef Dylan McGrath. First known for his high end restaurant Mint, Dylan set out three years ago to design a new concept revolving around nutritional knowledge. With his business team at hand, Dylan wanted thisventure to result in quite the opposite of what Mint was. He envisioned a rustic, unassuming and casual restaurant that would still produce excellent food offering choice and variety, and with that, Rustic Stone on George’s Street was opened which is very close to temple bar area. This approach from Dylan and his team has established a form of confidence with neighbouring restaurateurs and the dining industry itself.

Many more restaurants within the hub have influenced this shift, such as the innovative Mexican 777, the new and impressionable Whitefriar Grill, the popular Coppinger Row – only a stone’s throw away, Darwins and their long standing quality of meat and not forgetting the very modern and clever established Pichet – owned and run by Nick Munier. 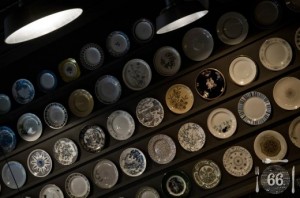 Over the past few years, one of the most well know Dublin restaurants, Brasserie Sixty6 on George’s Street, just off Dame street and near trininty college, has evolved in to an extremely popular American style brasserie, serving great Irish produce in a friendly, stylish and approachable setting. Brasserie Sixty6 is a people’s restaurant, delivering delicious simplicity with affordability. 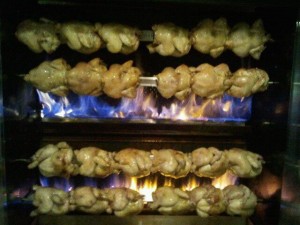 The restaurants use of a Rotisserie Oven echoes its American ethos and homely atmosphere. Sixty6 is one of Dublin’s larger restaurants with seating for over 180 people, catering for large groups and parties in their atmospheric Art Gallery & Snug areas and hosting a more intimate dining setting in the main restaurant floor and cocktail lounge area.

Dylan McGrath’s latest venture Fade Street Social which is a few seconds away from Stephens Green, is spilt in to four parts, this unique Irish social experience offers two very different restaurants on the ground floor with a cocktail bar and roof garden above it. A Gastro Bar which serves innovative, casual, grazing treats on one side, and on the other side a more formal setting offers diners the classic A la Carte menu, with the novel option of selecting from an array of delicious beef cuts to share from their board. The menu continually changes with the seasons and is dedicated to using Irish produce from the best Irish suppliers. 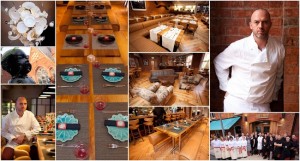 These restaurants in Dublin have immensely grown the popularity of their location and have made the area stand alongside some of the most famous culinary districts in the history of Dublin dining.

Ireland’s restaurant industry has seen its fair share of tough times, some have failed, others have triumphed and some of the industries people have used their failure to lead them to future success. Throughout it all, the one thing we can be sure of is that food will always be enjoyed and loved. Over the years, the Irish have grown an affinity with dining out, especially near Temple Bar and Stephens Green areas, and with Dublin having a world class array of choice when it comes to restaurants, it’s no wonder this is the case. As Oscar Wilde once said “After a good dinner one can forgive anybody, even one’s own relatives”.