A vegetarians view of Brasserie Sixty6

“Since becoming a vegetarian I have witnessed moments of tension when ordering food in many restaurants and cafés. As I’ve asked for something without meat or an alternative to the sometimes one bland option on the menu, I’ve felt uneasy as I believed I was making the situation inconvenient for the waiter, waitress and/or cooks in the kitchen. It can be a somewhat daunting experience as you go to order something that isn’t so straightforward and can make you feel mad awkward!

However, with the recent surge in the number of vegetarians, vegans and even coeliacs, restaurants are becoming more accustomed to catering to these diary requirements. As a result of that they are becoming more creative in embracing alternative foods and their textures and flavours that result in an extremely palatable outcome. In cases like Brasserie Sixty6 they do all this while making the experience as easy and carefree as possible.

After hearing of their separate ‘Vegetarian Menu’ I just knew I had to check it out! I had never been before but had always heard such good things about the it’s atmosphere, service and of course, their food, so I was extremely excited to taste what they had to offer.

I visited the restaurant on January 3rd, 2016 at around 4pm with a friend of mine who is vegan and has a mild allergy to gluten. When we arrived I had noticed that the restaurant was quiet and assumed it was because of the time of year.
Before heading inside we decided to have a read of the menu but soon realised that the vegetarian menu wasn’t on display and instead said to ask the server for the options. This approach usually works for other restaurants as they have minimal and sometimes adhoc options but as the saying goes ‘if you have it, flaunt it!’ If I hadn’t known beforehand that they had their very own vegetarian menu I might not have given them a second glance.
As we headed inside we were approached by a confident and friendly gentleman who I sensed was a supervisor or at least someone holding a senior position. We asked for a table for two, with two vegetarian menus and he escorted to our table. The ambience was very welcoming. Simple, yet effective Christmas decorations remained, adding warmth to the restaurant. 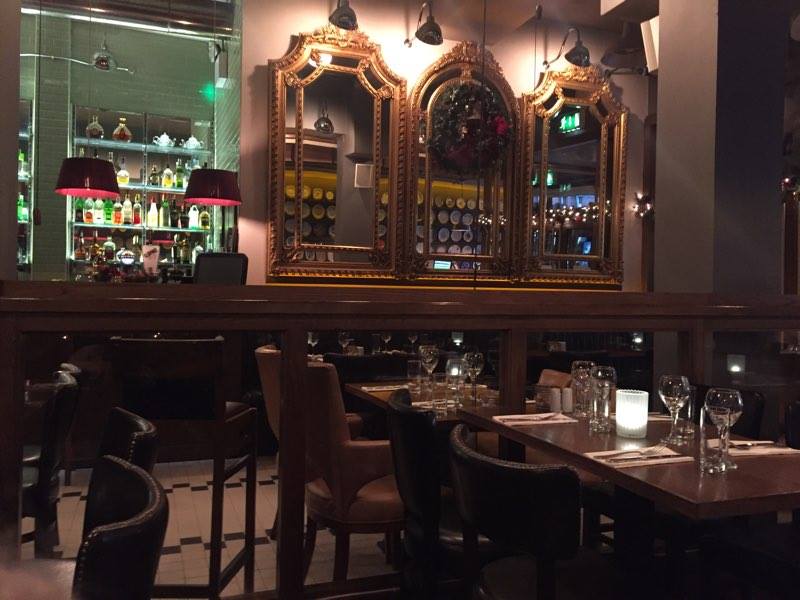 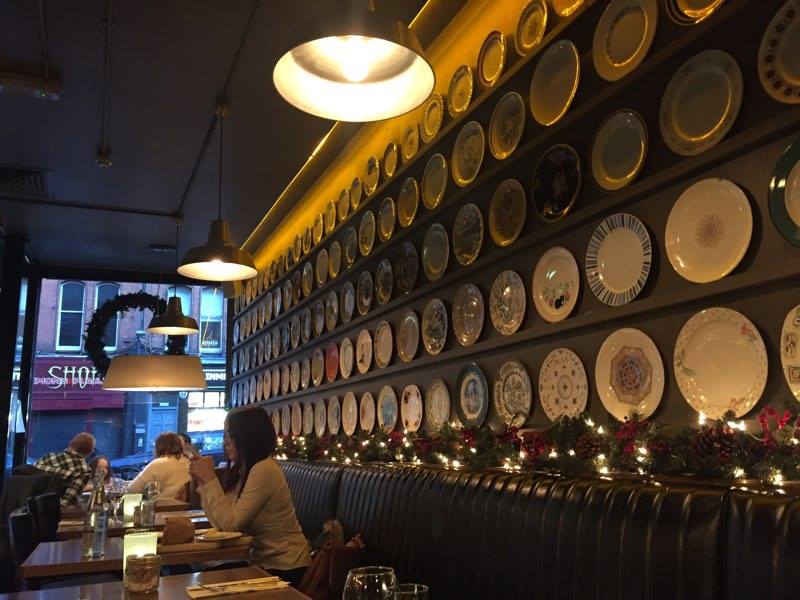 Once I saw the menu I had no idea what I wanted to have. It was great to have so many options, each one as great as the last! My friend spoke to the waiter who advised her of the best alternatives and potential amendments that can be made for her to suit her diet and her taste, removing the tension from the sometimes awkward ordering process and making it extremely easy for her. He not only said ‘you can have this or this’, he offered to tailor it to her by saying ‘if you prefer it this way we can do this for you instead’ which I thought was a lovely touch. 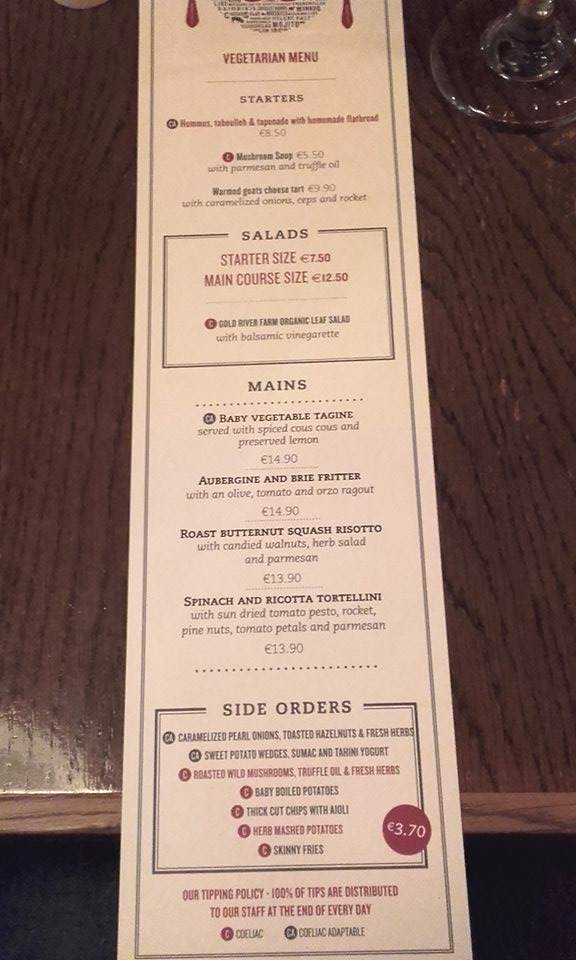 I opted for the ‘Aubergine and Brie Fritter with an olive, tomato and orzo ragout’ for something different. I loved their use of various flavours and textures here. The crispy outer coating of the fritter was just perfect and as you crunched into it, the melted brie spilled out topped with the artichoke. The orzo (a pasta consistency that resembles the look of rice) is something I’ve heard about but never tried, was so light and complemented nicely by the tomato ragout and few sharp tasting olives. Though the olives tasted strong there was just the right amount there that they didn’t over-power the dish but if you’re not a lover of olives then I might consider asking for the dish without them.
My friend opted for the ‘Baby Vegetable Tagine served with spiced cous cous and preserved lemon’ but to suit her diet the Tagine was served with a side salad and chips instead of the cous cous. We then shared the ‘Caramelised Pearl Onions, Toasted Hazelnuts and Fresh Herbs’, ‘Sweet Potato Wedges, Sumac and Tahini Yoghurt’ (which usually comes with a tempura batter but in our case was left without) and the ‘Roasted Wild Mushrooms, Truffle Oil and Fresh Herbs’.
These two mains and three sides came in at €40.90.

**The flavours in the sweet potato wedges were out of this world and I would recommend everyone to try them!**

Nothing that we tasted was lacking in any sort of ‘oomph’ and everything was so tasty, wholesome and filling. You know you’re having good food when it’s too good to talk to the person you’re with to tell them how good it is!! After each bite the only communication we made was the sounds of ‘ooohs’ and ‘ahhhs’ before ultimately exclaiming how full we were as we tried our best to make our way through everything! The only fault I could find was that the vegetarian menu wasn’t on display or even suggested that they boasted a separate one for their own advertising purposes.

It was when we were about half-way through our meal numerous people started to walk in, proving I was wrong with my earlier theory of the quietness being down to the time of year! It’s evident why the restaurant is so popular and I can safely say we will definitely be back again!!” 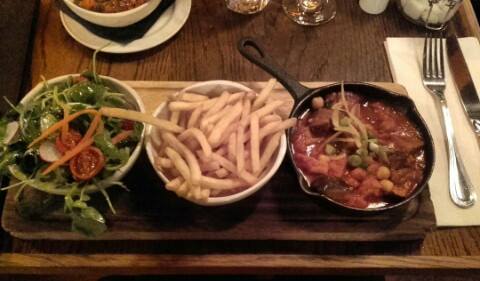 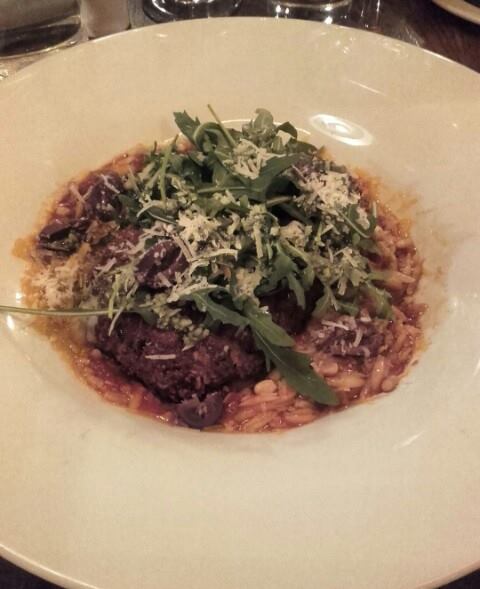 And there you have it –